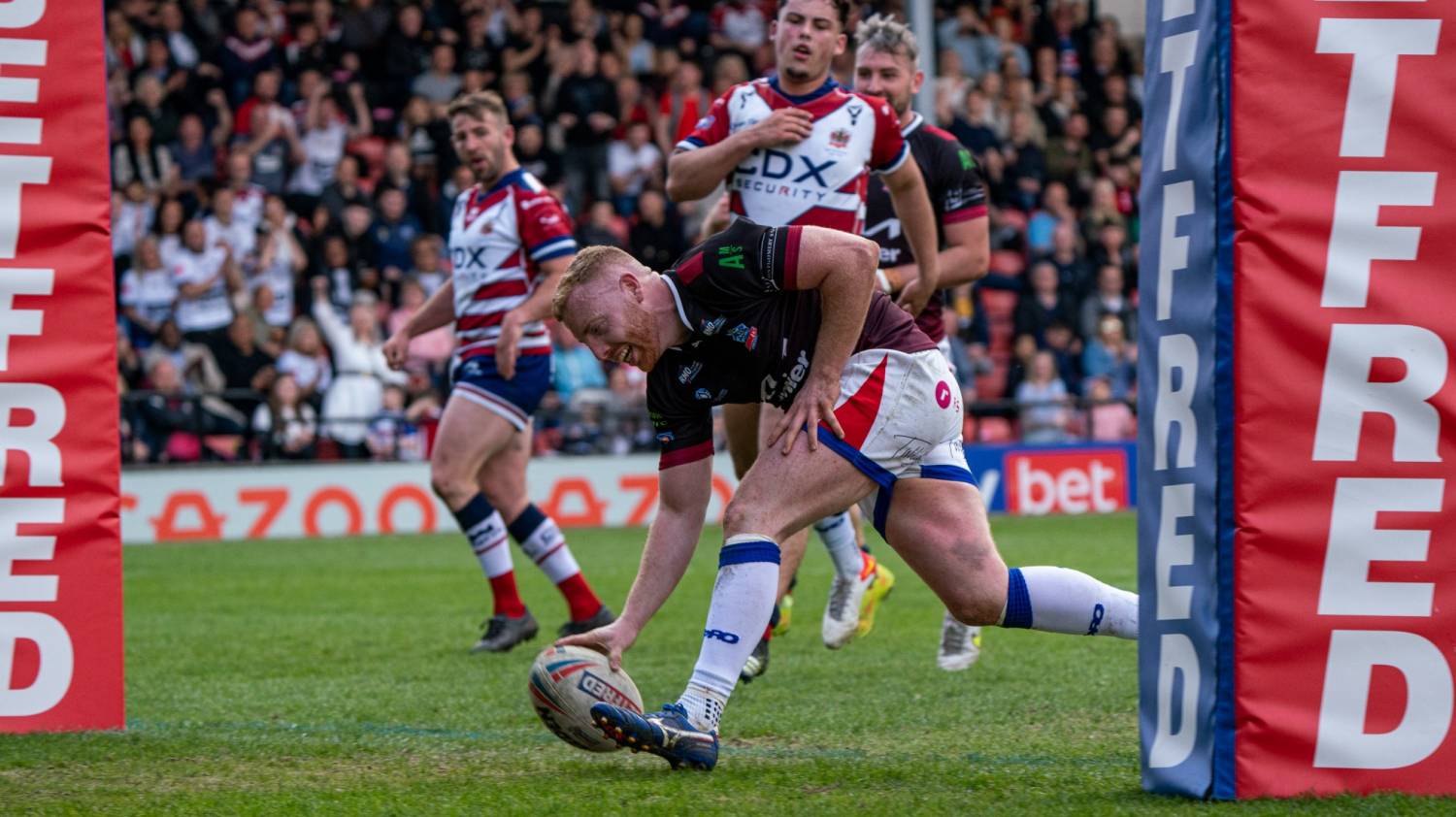 Rochdale Hornets ran out 34-18 winners over bitter rivals Oldham, in the first league meeting between the sides in almost five years.

The added intensity of a local derby was evident right from the first whistle, with Hornets making their best start to a game all season.

Paul Brearley, captain on the day, set the tone with some huge early hits – which were soon followed up by fellow forwards Zac Baker and Callum Marriott.

This excellent defence allowed Hornets some good attacking field position when they turned over the ball and from there Sheridan kicked a penalty, on nine minutes, to move Matt Calland’s side into the lead.

However, Roughyeds grew into the game off the back of this and it wasn’t long before Restall went over for his first try of the afternoon.

Martin Ridyard, Oldham captain, added the extras to give the visitors a four-point lead.

Hornets seemed to benefit hugely from the introduction of Fuifui Moimoi, on the twenty-minute mark, with the Tongan prop forward driving the hosts up the field with his typically emphatic ball carrying.

With the Oldham defence drawn in, Rangi Chase was able to put in Nixon for Rochdale’s first try of the game.

It was then the turn of another interchange, Joe Taira, to splinter the Oldham defence.

After a barnstorming run, the Fijian found McNally who offloaded brilliantly to put Sheridan in for his sixth try of the season.

Although, the scrum-half’s converted try was soon cancelled out by a slick Oldham score – courtesy again of fullback Restall.

Ridyard added the extras to leave the teams deadlocked at 12-12, going into half time.

Hornets came out firing once more in the second half and were soon rewarded when Sheridan latched on to an improvised yet pinpoint kick from Chase, to score his second try of the afternoon.

It appeared that Hornets were going to have their work cut out in the final 25 minutes when Marriott was red carded for leading with his head, following an altercation after being tackled.

But it only seemed to galvanise Calland’s side and, before long, McNally was in under the posts after running a great supporting line off another Sheridan line break.

Some four minutes later, Hornets were asking questions of Oldham again after powerful carries from Taira and the impressive Ben Forster set up a threatening attack.

Quick ball then allowed the backs to spread it wide, to the right, with Tyrer going over for his first league try of the season – to put breathing space between the two sides.

Oldham hit back minutes later with Restall capitalising on the man advantage to secure his hat-trick.

However a second McNally try, five minutes from time, put the game beyond all doubt at 34-18.

The compelling win marks Hornets’ third in as many games, and they’ll be hoping to continue this fine run when they make the long trip to London Skolars next Saturday (3:00pm kick off).